Mix it like Shatbhi Basu: The Journey of India’s Bartending Queen

India’s first lady of mixology, Shatbhi Basu has proved to us, time and again, that there is nothing a woman can’t achieve if she puts her mind to it. Vikhroli Cucina spoke to the celebrated mixologist at Godrej Nature’s Basket during the Summer Cooler Fest. Here is a glimpse of her journey as the reigning queen of the Indian bartending space

Shatbhi Basu is a busy woman. In between fixing drinks behind the counter, she also juggles many responsibilities: helming STIR, India’s first school of bartending; serving as the Indian ambassador to the Distilled Spirits Council of the United States; contributing columns for magazines and newspapers; and authoring books on the art of making cocktails. For most, she needs no introduction. However, in the interest of the ones living under a rock, she is India’s first female bartender who not only dared to take up a profession associated with men 35 years ago, but also blazed her way to the top, establishing herself as one of the top mixologists in the country. 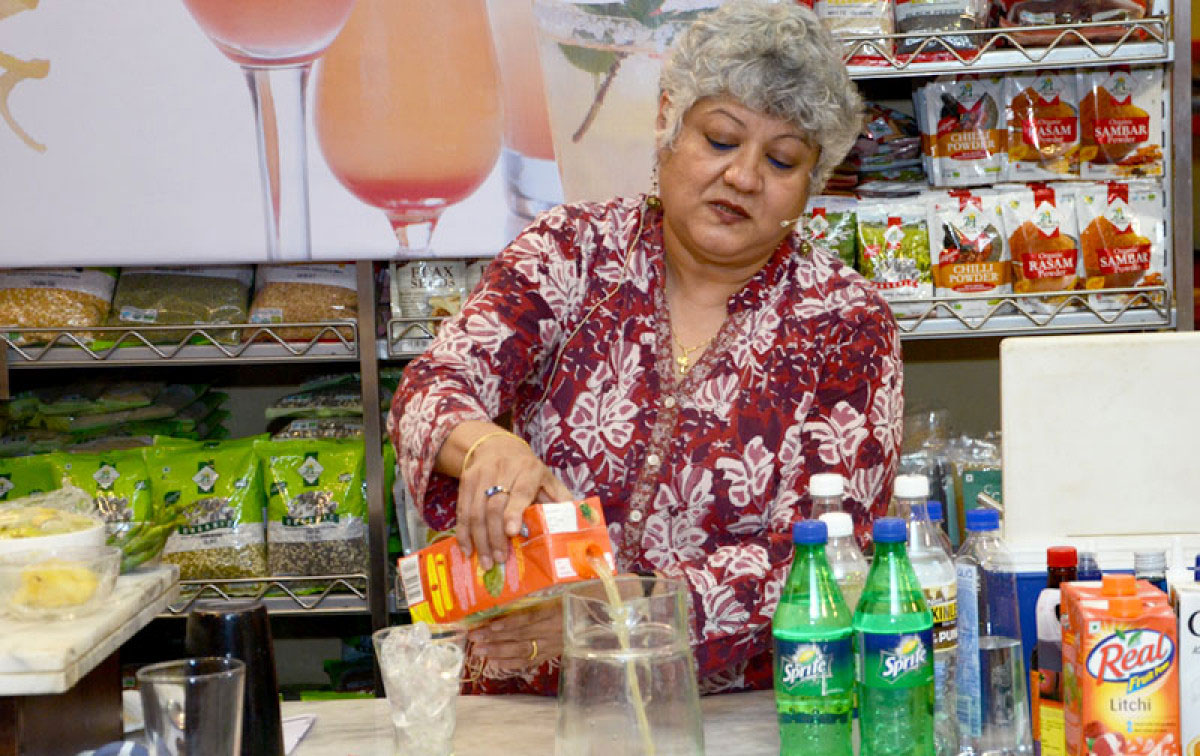 Such a long journey
Shatbhi begins our chat with a trip down memory lane. “I have been doing it for way too long; I remember the first time I got my drink right,” she recollects fondly. “I remember my first cocktail menu, the first time my students got a good job, my first brand journey with Smirnoff, my TV show ‘In High Spirits’ on NDTV and my first book on cocktails. There have been so many firsts!” she exclaims.

So what prompted the prima donna of mixology to take up bartending at a time when it wasn’t well known as a career? “Actually, I started out wanting to be a Chinese chef,” she confesses. But that dream fell through, mainly due to resistance from male-oriented professional kitchens that were not happy with the intrusion of a woman in their domain. Shatbhi thus had to abandon the chef’s apron for a stint in restaurant operations.

The experience, however, turned out to be an eye opener for her. “I discovered that my practical knowledge of the bar and my cocktail-making skills were quite poor,” she says. “I realised that knowing a recipe was quite different from actually making a drink.”

A fighting chance
Being a woman in a male-dominated field had its own set of challenges; her initial days learning the ropes of bartending were tough and support from the industry was scarce. “There was no mixology school in 1981 when I wanted to learn. Established bartenders were also not happy about sharing information or skills, so learning was difficult,” she recollects.

However, adversities couldn’t keep the feisty mixologist down and the challenges only whetted her appetite for more. Shatbhi set out on a mission to learn the craft on her own in the best way that she could, “I taught myself with the help of a brilliant bartending manual and some help from friends and family.” “In fact,” she reveals, “I learned to be a bartender after I was already a manager.”

To make matters worse, Shatbhi got into bartending at a time when access to international products in the market were limited. So mixologists usually had to make do whatever was available in the market. “This really pushed me to make great stuff with whatever was available,” she says. Shatbhi recollects scouring through interesting local produce and creatively using it to compensate the lack of traditional ingredients.

Despite all the problems, persevere she did: rustling up her first dry martini without dry vermouth, putting together her first Pina Colada without Malibu or coconut cream and furnishing a Black Russian with home brewed coffee liqueur.

The constant inquisition from busybodies was also of little help. “There were those who would ask me why I chose to work in a bar when there were so many other options. But women would find it refreshing to talk to me and get a really nice drink,” she states.

Stirring the spirit
Having experienced the lack of valuable guidance at the beginning of her career, Shatbhi went on to set up an institution to mentor rookies in taking the crucial first steps in mixology. STIR is India’s first school for aspiring bartenders which offers comprehensive training in the basics of bartending, right from bar ethics to bar acrobatics. “We counsel and give direction to young people looking for a career in bartending. We take them through every aspect of the bar, from the history and production of alcoholic beverages to mixing with them, serving them correctly and talking intelligently about them,” she avers.

“At first, I plunged right in unsure whether they would be any takers. I also did not have a place nor funds to start a school,” she reveals. In 1997, she held a symposium in Mumbai for bartenders and people from the F&B industry called STIR - The Official Meet for Bartenders. “This was a 3-4 day meet which began with a seminar on relevant subjects and was followed by live competitions for professional and student bartenders,” she states. Eventually, in 1998, STIR also took off in Bangalore.

“This convinced me that bartending as a career was indeed the future,” she states. It was during one of the meetings with the Hotel and Restaurant Association that she met Kamlesh Barot, a member of the managing committee. “He believed in my vision and offered me his premises at Revival Restaurant in Mumbai,” says Shatbhi. Her efforts bore fruits and the academy was launched in December 1999 in Mahim, where she has been teaching ever since.

Flying high
One of the most recognisable names in the Indian bartending space, Shatbhi has been a force to reckon with in the male-dominated industry. Despite the strides made by stalwarts like her, the underrepresentation of women in the field leaves a lot to be desired. “There are hardly any women in the field. Some are here for the glamour, but only a few are here for the right reasons,” she laments.

But for the women who dream to make it big in the bartending space, the master mixologist dishes out some valuable advice. She says some introspection is necessary before taking the plunge. “The important question is, are you passionate about the art of bartending? If yes, then that’s the career you want to pursue,” she states. Women often face opposition from their families largely due to the stigma associated with the profession. In such cases, she recommends asking oneself if one has the strength, conviction and knowledge to combat the prevalent ignorance.

So how well has bartending in India fared compared to the rest of the world? Shatbhi is definitely looking on the bright side! “I think we have evolved dramatically and are reasonably at par with the rest of the world, except for the lack of ingredients and products to work with,” she states with conviction. To all those who are on the fence about bartending as a profession, Shatbhi serves it straight up for you, “I look upon untried careers like bartending as an opportunity to shine. Change your perceptions that arise out of cultural blocks and lack of insight; showcase your skills and rise above the ordinary!”

Let’s drink to that, Shatbhi!