I am my own Godfather: Chef Varun Inamdar

From being India’s first chef with a registered fan club to treating the Royal Family of Kuwait, Chef Varun Inamdar has had an exciting journey. Recently, he raised the bar by setting a Guinness World Record for making the largest chocolate mud pie. While Varun has several feathers to his cap, there’s a lot in his persona that keeps his feet firmly on the ground. In a candid chat with Vikhroli Cucina, he talks about the highlights of his enduring journey 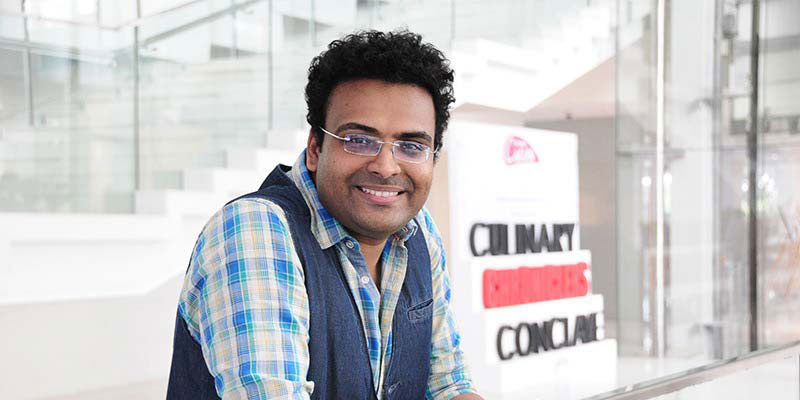 Like every success story, Varun’s story also includes his dreams and struggles. He began working while he was still in college, back in 2002. “I wanted to start earning and buy the book Larousse Gastronomique which is considered the Bible of the kitchen.” He moved a step closer to achieving his dreams by securing a job in a restaurant. However, as a fresher, his role merely revolved around washing dishes. Eventually, he got an opportunity to showcase his talent as a chef, and the rest is history! “If you categorically mark my journey of the last 17 years, it has been from a dishwasher to whatever I am doing today.”

Varun’s tryst with chocolates began with a blessing from Mother Teresa. “It is possibly one of the biggest blessings I have ever received. Mother Teresa had once come to our school as a chief guest. As a young teen, I was excited to learn that she was fond of chocolates and so I went up to her to give her one. Placing her hand on my head, she said sweetly, “No, I can’t take this from you. This chocolate, my child, is going to change your destiny one day.” I didn’t know what it meant, then. But today, I feel blessed to be known as a chocolatier.” Fans and followers across the globe fondly call him 'The Prince of Chocolates'.

Varun’s talent has earned him a spot among the top chocolatiers of the world. As the brand ambassador of Ecuadorian cocoa, he has trained Indian cocoa farmers and guided them on technical aspects of cultivating a good crop. He has also represented India at the three-day Cocoa Revolution Conference & Exhibition in Vietnam, a remarkable achievement.

Varun has forayed into many sectors – as a chef, food stylist, author and a chocolatier – and has excelled in all of them. “I have been passionate about every role that I have taken up, with my favourite being that of a food stylist. It’s mainly for the fact that India doesn’t have enough talent who can give a run to international food stylists.” Varun feels there’s a lot of prospects to generate new, original ideas. As a food stylist, he has over 400 restaurants in his kitty. He is associated with over 140 brands and has styled over 75 cookbooks for international authors. His popular YouTube show ‘The Bombay Chef’ ranks #3 in the world with 240 million+ followers.

Varun’s style of cooking is very simple. “My recipes will never find zucchini or asparagus just for the effect. I will never use bell peppers; I would rather use capsicums which are readily available in every household,” he explains. This is possibly why his fan base extends to Pakistan, Spain, Russia, and even Latin America. Working for over 240 events in a year, Varun is literally hopping, skipping, jumping from event to event, while giving his 100 per cent to each.

Professional to the core

A few years ago, Varun set a world record by creating a six-feet-high edible chocolate mannequin. He also grabbed attention by creating a chocolate Ganesha. Innovative thinking comes naturally to him. “I don’t need separate time for that. I could even dream about it, or think of it under a shower. I don’t need to sit on a desk with a pen and a paper to come up with ideas.” Varun says he sets aside a certain amount of time for each assignment and diligently follows it. “I have kept my exclusivity.”

“While cleaning my library, I came across a Guinness Book of World Records, gifted to me by my father. That sparked the idea of having my name in it. My friend Joseph Dias, chairman of the Trinity Group, supported me and took care of the paperwork and the organisational work.” It took 18 months to finally make it happen in Goa this August.

Varun and his team prepared the largest chocolate mud pie in the world. It was six-foot in diameter and weighed 1,346. “It was quite a task figuring out where the mold would come from, manage the logistics, and put together a team to work on this ambitious project.” Once the record was set, the mud pie was given to the World Food Bank, who distributed it among 3,500 kids.

“As a chef, you always want to feed, and if you can feed the needy and the poor, there’s no bigger joy than that.”

“My message to my followers is simple – hard work is everything; nothing can basically pull you down. I am here on my own, I am my own Godfather! I have charted my own career path and I have been swimming in my own deep sea.” Varun’s journey has been no less than an inspiration and it is this spirit that keeps him going!

Chef Varun Inamdar is up to many bigger adventures, and Vikhroli Cucina wishes him all the best in all his endeavours!