Home chef Roopa Nabar is that kind of cook who likes to give her soul to a dish. Hailing from a joint family, Nabar grew up watching a lot of food cooked in her family on special occasions. A chance win at a cookery show in Mumbai boosted her confidence. Currently, she works closely with Chef Sanjeev Kapoor demonstrating easy Indian and international cuisine on his YouTube channel. 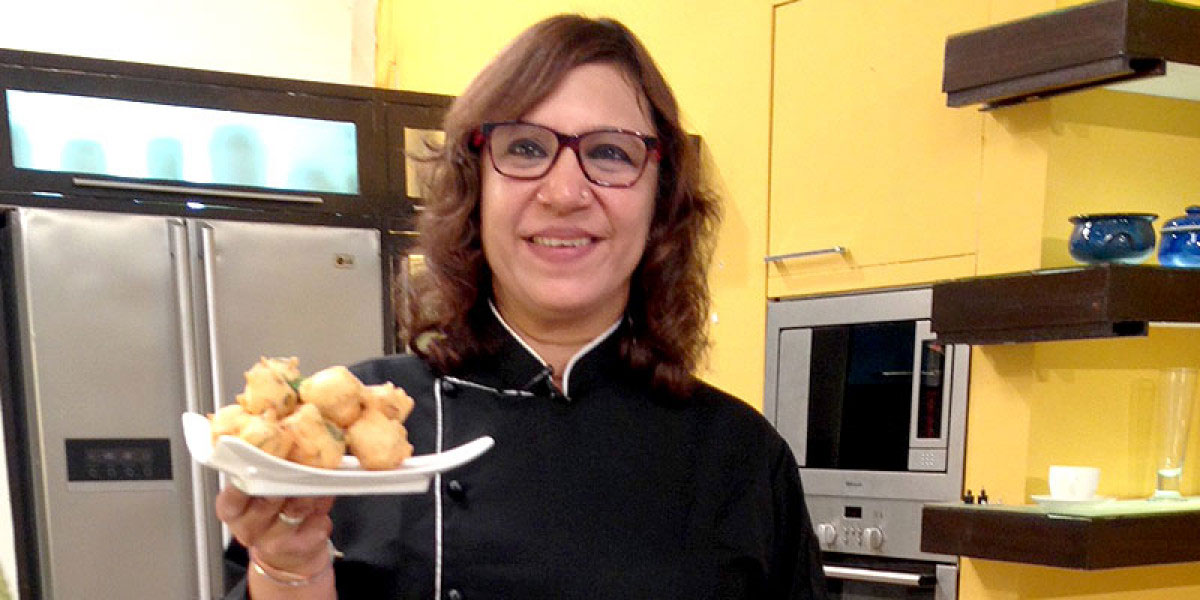 Currently, urban India’s interest in hyperlocal food (according to Godrej Food Trends Report, 2019) has put the spotlight on Gaud Saraswat Brahmin cuisine. For Home Chef Matters – Towards Healthy Cooking, Roopa Nabar decided to cook a typical Gaud Saraswat Brahmin fare consisting of Goli Bhaat (a traditional favourite during festive occasions) with steamed chicken mince balls, pandhra rassa (white chicken curry), baked Bangda in triphal (Mackerel cooked in turmeric leaves) and Kismoor (a dried fish green salad). She says, “My biggest lesson from cooking at St Regis is how to be meticulous in meal planning. I learnt how to pre-plan stuff a day before the main event.” She spoke to Vikhroli Cucina about the salient features of her cuisine.

Nabar belongs to the Gaud Saraswat Brahmin community in Maharashtra (commonly known as GSB). This unique community descended from Brahmin caste and flourished along the banks of the mythical river Saraswati (joining the Ganga and Yamuna in Prayag). When the river Saraswati started vanishing, people started migrating to various parts of India. They migrated to Goud Desh (Bihar and Bengal) and later along the Konkan coast to Kerala. Their cuisine bears influences of their migration over centuries. She informs, “Since the Konkan area lacks grazing areas for cattle, use of milk in food is not there. Milk is used only to make curd and chai.”

According to Nabar, the standard GSB thali starts with solkadi, a digestive drink made of garlic and kokum. Other items include mixed-grain pooris, rice, chicken sukka, fish curry and tausalli (cucumber pancake).

GSB food is rife with backyard vegetables and seasonal greens, which are used in curries — snake gourds, ridge gourds runner beans, and tube vegetables like sweet potatoes, pumpkins, wild mushrooms, bamboo shoots, raw and ripe jackfruit. The Gaud Saraswats flavour their food with an array of masalas. The community is known for its love for fresh coconut, fiery red chillies and pepper-cloves-cinnamon spices. “While ghee is not used in our cuisine, coconut oil is liberally used. Tamarind and kokum are used as souring agents and jaggery is added for a dash of sweetness,” she adds.

Nabar says that perhaps the biggest misconception about GSB cuisine is that they are meat-eaters. Traditional GSB food is vegetarian though they are also ardent seafood eaters. The popular seafood preparations include fish curries or marinated fried fish using ground coconut and spice combinations.

In most Saraswat kitchens, the fresh catch is rubbed with turmeric, salt, and then pan-fried with a sprinkling of coconut oil. “The inclusion of fish in the diet is considered as vegetarian. Gaud Saraswats consider fish to be samudraphaal (fruit of the sea) and not as meat,” confirms Nabar. Seafood like mackerel, prawns, silverfish, sardines, kingfish, crabs is mostly consumed.

One of her most loved fish dishes is prepared in turmeric leaf for instance the baked bangda (popularly called chuliwarcha), which she cooked at the event. She says, “Besides imparting flavour to a dish, turmeric leaves (which are in season) protect the flavour of the fish and preserve the juices released during the steaming process. Banana leaf is also another alternative to bake fishes.” The other strong influence that has come in her cuisine is the fiery Kolhapuri style as her husband’s side hails from the region.

Nabar uses a lot of dried chillies in her dishes such as the Byadgi and Sankeshwari chillies. These chillies are roasted along with other spices and ground together with the coconut. She explains, “Kashmiri chillies are a big no-no in our cuisine. The fiery quotient is from the Sankeshwari chilli, which gives the unique spicy zing and red colour. I use these mostly in fish preparations like preparing sukka fish. The mildly orange Byadagi chillies are thin with dry crinkly appearance.”

Nabar has her hands full right now shooting for recipes on the YouTube channel. She also develops nutritious recipes for cancer patients at the Cope with Cancer organisation in Mumbai. She shares a quick tip for amateur cooks: “If you are baking your fish in an oven in the kitchen, make sure you put a bowl of water underneath the dish. This technique will keep the juice and texture of the fish to remain intact without making it dry.”

What’s your favourite GSB food? Share your comments with readers below.