Kashmiri home chef Jasleen Marwah has carved a niche for herself for her flavourful Kashmiri spread in the maximum city. From organising pop-ups at her home to collaborating with restaurants, Marwah’s primary objective is to promote the authentic home-style cuisine outside the valley. “Our cuisine is simple to cook yet has rich flavours,” says Marwah who hosts pop-ups at her home under her brand Namak Swaad Anusaar. 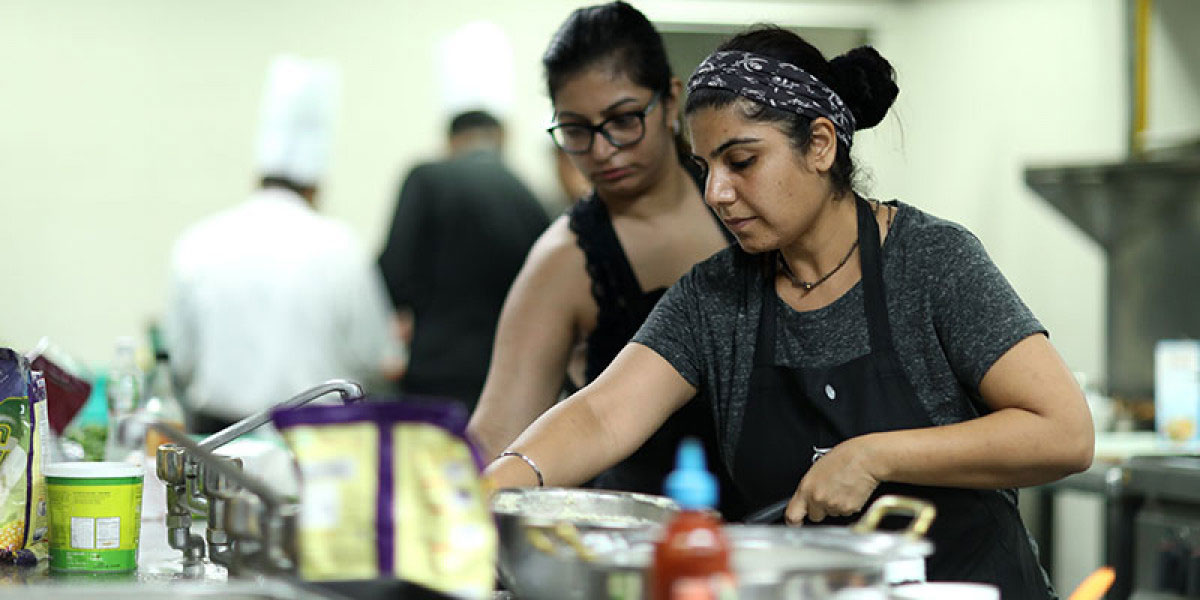 Marwah’s delectable spread at St Regis was an elaborate affair. The star attraction on the menu was the barbecued mutton ribs. “I chose the portion and cut in such a way that they were not too heavy but crispy from outside yet thoroughly cooked from inside,” she explains. Marwah has strong memories of several home-cooked Kashmiri food as a kid growing up in the valley. “My mother was not very much into cooking. But on special occasions, we used to get a lot of delicious food on the table from our neighbours,” she recalls. One of her favourites includes Kashmiri French beans made in dry spices.

She speaks to Vikhroli Cucina about the treasures of Kashmiri cuisine.

Devotion to main ingredients forms the crux of Kashmiri food. Traditionally, the Wazwan (Muslim style ceremonial feast) cooking was exposed to various cultures including Central Asian, Middle Eastern, Persian, and Afghani. On the other hand, Kashmiri Pandit cuisine is simple and does not use onions and garlic.

Marwah says that plenty of fresh vegetables take centre stage in the thali, which is cooked together with meat and fish. In summer, Marwah loves to cook a lot of freshly available leafy vegetables along with mutton or fish. Since winter in the valley is harsh, Kashmiris use dried fish or black beans as well as the sweet and sour taste of apples, plums, and apricots.

The spices and the ingredients used are sourced locally like chillies, turmeric, and saffron. The Kashmiri Pandits are one of the few Brahmin communities in India who are non-vegetarians, besides Bengalis and Gaud Saraswat Brahmins.

The meat of the matter

For a meat lover, this cuisine is a must-try. “While chicken preparations do not feature in a thali, mutton is hugely preferred,” she says. Some of her signature mutton dishes include Tabak Maaz, rogan josh, goshtaba and aab gosht (mutton cooked in milk). Mutsch, a Kashmiri meatball in spicy gravy, is made with minced meat of goat (mutton). No onion-garlic-paste or fine-chop-anything and ‘no-bhuno-till-oil-separates whatsoever’,” she adds. No meat dish is complete without rogan josh, cooked on festive occasions in many households. Mutton is slow-cooked in aromatic Kashmiri red chilli powder along with other herbs and spices such as cinnamon, cloves, cardamom, mace (javitri) and bay leaves. Yoghurt is used to marinate mutton leg pieces and fried in mustard oil. Once the curd dries, it is cooked on low flame with the addition of asafoetida (hing), cumin, and cloves till brown.

Kashmiris are big on the look and feel of a dish; the flavours and textures of a meal. She uses a lot of saffron in her dishes, which gives an exquisite texture. She adds, “While ghee has been an age-old medium, mustard oil is also used keeping in mind the health quotient. Fennel, ginger powder, and hing are the key ingredients in most of the preparations.”

The vegetarian fare in a Kashmiri Pandit thali is also unique. Marwah’s all-time favourite is the iconic dum aloo, a star attraction on most auspicious ceremonies. “In every Kashmiri household, the true test of dum aloo is to see whether the hearty big-sized aloo is cooked properly from inside coated with masalas. It is nothing short of culinary art,” she says. The dum aloo is slow-cooked and flavoured with star anise and fennel.

The classic Haak or collard greens, a staple dish in the valley and rarely seen outside is another favourite. “This soul-satisfying dish is flavoured delicately and minimally with fresh green chillies,” she informs.

When she is not cooking in her kitchen, she is found behind the potter’s wheel. Next Marwah is eyeing at collaborations with restaurant kitchens in a big way to promote Kashmiri cuisine. She admits, “My dream is to create a book that would feature recipes of the food that I have discovered with my neighbours, friends, and family.”

What’s your favourite Kashmiri food? Share with readers in the comments below.