Sunflower oil for baking? Groundnut oil for seasoning salads? Yes, you read us right! That modest cooking oil of yours may be capable of more than just frying and sautéing. However, choosing the right oil for your culinary needs can be a daunting thing to do, especially with the overwhelming variety staring back at you from the supermarket shelves. In this quick guide, Vikhroli Cucina takes you through eight household favourites and how to optimise these oils according to their strengths. Read on! 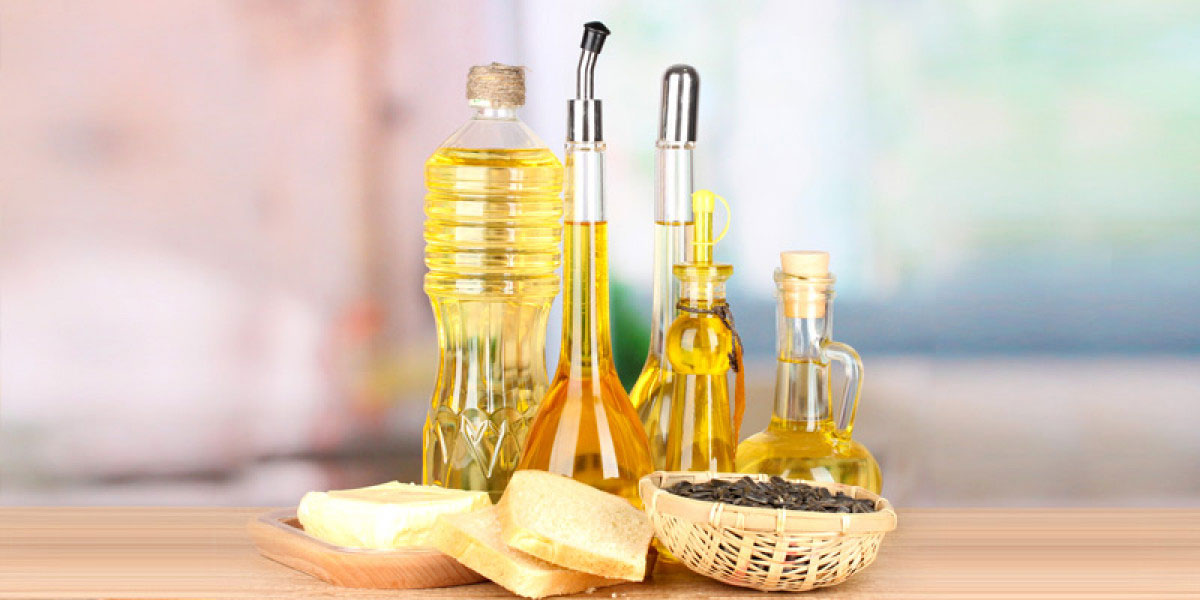 Even the most grease-fearing health nut would agree that oil and fats make food taste fantastic. You feel it in the rich decadence of a chocolate cake, in the audible ‘crunch’ of a potato chip and even in homely goodness of a Greek salad. Apart from bringing in the yum quotient, oils and fats are also a treasure trove of healthful vitamins.

These versatile kitchen essentials fulfil a wide range of cooking functions, right from frying to roasting. However, cooking oils have different smoke points (temperatures at which each may burn and smoke); most of them including groundnut, sunflower, rice bran, ghee and sesame are sturdy and can be used for deep frying, others such as extra virgin olive oil are delicate and are only suitable as seasoning. If you find yourself lost at the grocery section of the supermarket wondering which oil to get, we totally get it! There is a mind-boggling variety of oil available in the market today. So to allay your confusion, we have broken down the six common varieties of oil used in India and what they can be best used for!

One of the most popular cooking oils in the country, groundnut oil can be used for a variety of functions. The secret to its versatility is its neutral taste which does not interfere with the flavours of food. Its cold-pressed variety has a yellow colour, nutty aroma and a delicate, sweet taste, while the refined one like Godrej Vegoils’ Filtered Groundnut Oil is pale and is free of allergens and impurities.

Functions: Groundnut oil is one of the best oils for deep frying. Apart from sautéing, roasting and grilling, this flavourful oil can also be used as seasoning in salads and sauces.

Naturally free of cholesterol and replete with Vitamin E, sunflower oil is a boon for people who are watching their health. This pale, flavourless oil is extracted from sunflower seeds and is used widely in households across the country. Several brands such as Godrej Vegoil's  Imported Refined Sunflower Oil comes enriched with Vitamins A, D and E.

Function: Sunflower oil is highly stable and has a good shelf life. This neutral-tasting oil can be used as a healthier substitute for butter while baking. It is also used to grease baking trays and cake pans.

Rice bran oil is extracted from the husk and the germ of rice and has various health benefits. It is less viscous than other oils, making it ideal for those worrying about their waistlines. Godrej Vegoil’s Physically Refined Rice Bran Oil is also rich in Oryzanol which is a known antioxidant. Many oils breakdown into toxic, potentially carcinogenic compounds at high temperatures, but not Rice Bran Oil! It retains its physical composition and antioxidants even at a high heat, making it one of the most stable varieties of cooking oil. It also helps in lowering bad cholesterol levels and balance cholesterol ratio.

Sesame oil, derived from Sesame or Til seeds, is a fragrant variety of oil used extensively in Tamil Nadu, Karnataka and Andhra Pradesh. As compared to other oils, it is least prone to rancidity. The delicious spicy chutney powder mulagapodi (which is mixed with oil just before eating) or “gunpowder” as it is colloquially know, tastes best when had with sesame oil. In southern India, sesame oil is also used extensively for pickling.

Functions: Sesame oil, known for its rich, nutty fragrance and delicate flavour profile, can be used to season Asian-style salads and in soy-based dipping sauces. Other uses include tempering and pickling.

They say that good quality olive oil can be savoured like an exquisite wine.  Over the years, olive oil has become synonymous with health. People have permanently switched to this Mediterranean staple for health reasons. The two most well-known varieties of olive oil are extra virgin and regular. Extra virgin is a high quality variety with a fruity flavour. Regular olive oil is a blend of virgin olive oil and refined olive oil.

Ghee, or clarified butter, has not only been a staple in Indian cuisine for centuries but also featured extensively in Ayurvedic texts as a base for various medicines; so there’s no arguing about its many health benefits. Sweet or savoury, ghee can be used to enhance the flavour of various dishes. Unlike butter, ghee is devoid of milk solids and water, making it suitable for those with lactose intolerance.

Functions: This versatile fat can be used for a variety of purposes like tempering and pan frying. It can also be used for basting meat and as a rub for roast chicken.