Served with a Song: In Conversation with Chef Antonello Cancedda

Antonello Cancedda, Chef de Cuisine at Prego at Westin Garden City, keeps his Italian roots close to his heart and his guitar even closer. Vikhroli Cucina caught up with him at Godrej Nature's Basket where he opened up about his undying love for Italian cooking and his pride at being a chef

The air was laden with the scent of Mediterranean herbs as we stepped into the basement of Godrej Nature’s Basket, Bandra, Hill Road, where Chef Antonello Cancedda was hosting Viva Italia, an exclusive culinary demonstration of three of his signature dishes. The audience were captivated, not just by his amazing culinary creations but his quirky anecdotes as well.

With over two decades of experience, Chef Antonello is an authority the field of fine, authentic Italian cuisine and is an inspiration to many chefs around the world. "My philosophy is very simple," he says, "I believe that the ingredients are the master and the talking point of my cooking." His exceptional understanding of Italian cuisine was the reason why top restaurants like Oregano in Chandigarh and Alba in Bangalore chose him to lead their culinary operations. Antonello is currently the Chef de Cuisine at Prego at Westin Garden City, Goregaon, Mumbai. He is all praise for Prego, "You won't find many like it in the country." 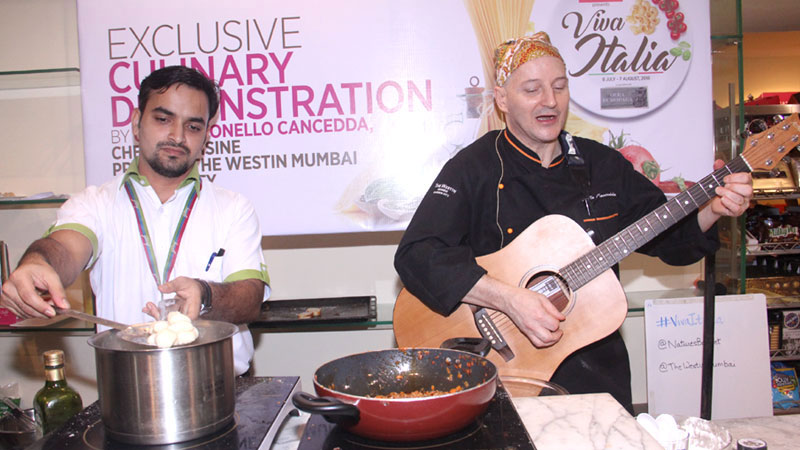 His sobriquet, ‘The Singing Chef’ may confuse many until they see Antonello reach for the guitar and serenade the audience with some soulful Italian numbers. Curiously, for a seasoned Italian chef, he has an unlikely kitchen companion: not the knife or the ladle, but a guitar. Turns out, Antonello was trained in classical guitar before he officially donned the chef’s apron. At Prego, he is known to regale patrons with songs to lighten their mood and to heighten their dining experience. His fondness for the string instrument goes way back. “When I was a child, my parents took me to the toy store and told me to take whatever I wanted; I went straight to the guitar,” he recollects. “When I started working, I would bring my guitar with me and play it in my free time.” To this day, he continues the tradition.

Memories of food
Ask him about his native place in Sardinia, an autonomous island region in Italy, and his eyes light up. "I was born there, but I grew up in Genova," says the chef. He recollects, "My earliest memories of food come from my father." The regular fare at the Cancedda household didn't just comprise pastas, risottos or chicken, thanks to Antonello's father who would go to the market and scour for the most exotic ingredients to cook with. It was his father's passion for the finer aspects of dining that instilled in Antonelle a love and curiosity for food. "When he came back home from the market, we knew there was going to be some new culinary experience for us," the chef says with a smile.

Starting out
The chef figure in Italy was larger than life according to Antonello. "He was kind of a heavy worker, cooking for bulk kitchens. Famous chefs in the country would give us that impression," he states. This fascination for the daunting chef figure inspired him to set out on a culinary journey of his own. It was the gravitas and the importance of the role that drew him towards the profession. "Cooking and feeding people is a huge responsibility," says the chef.  "You cannot let a crazy person do that job; they may end up poisoning you!" he adds.

But starting out as a rookie, he was assigned duties that were far removed from the glamorous undertakings of the chef that he had imagined. "In the beginning, I was doing all the jobs in the kitchen an assistant was supposed to do: peeling the potatoes and cleaning the pots and pans. After some time, they let you do minor jobs such as grating parmesan cheese," divulges the chef.

Viva Italia
Among the top best cuisines in the world, Italian food has been enjoying its time in the sun for quite a while now. The chef knows the reason for its popularity: the simplicity and freshness of its ingredients. However, the negativity surrounding its "unhealthy" image irks him to no end. "It is a misconception that Italian food makes you fat! The body needs energy and pasta provides simple carbs that we need," asserts the chef.

The Indian connection
Antonello's quest for spiritual improvement is what drew him to India and he is a self-confessed yoga lover. He also points out the similarities between Indian and Italian cultures which are marked by their love for food and family. For a Bollywood lover, the perks of working in India are plenty. The chef has served the likes of Imran Khan, Anupam Kher and Ayushmann Khurrana whose song Pani da rang is the chef's personal favourite. He beams at the mere mention of Sachin Tendulkar. “He is my favourite and I had the honour of cooking for him,” he states with pride.

So what is store for the celebrated Italian chef with a penchant for singing, five years down the line?  "I hope to be in Sardinia, in my house by the beach and cooking some nice Sardinian food," he reveals with a warm smile.