The grand Durga Puja bhog of bonedi (aristocratic) households of Bengal is all about keeping up the old culinary tradition alive. 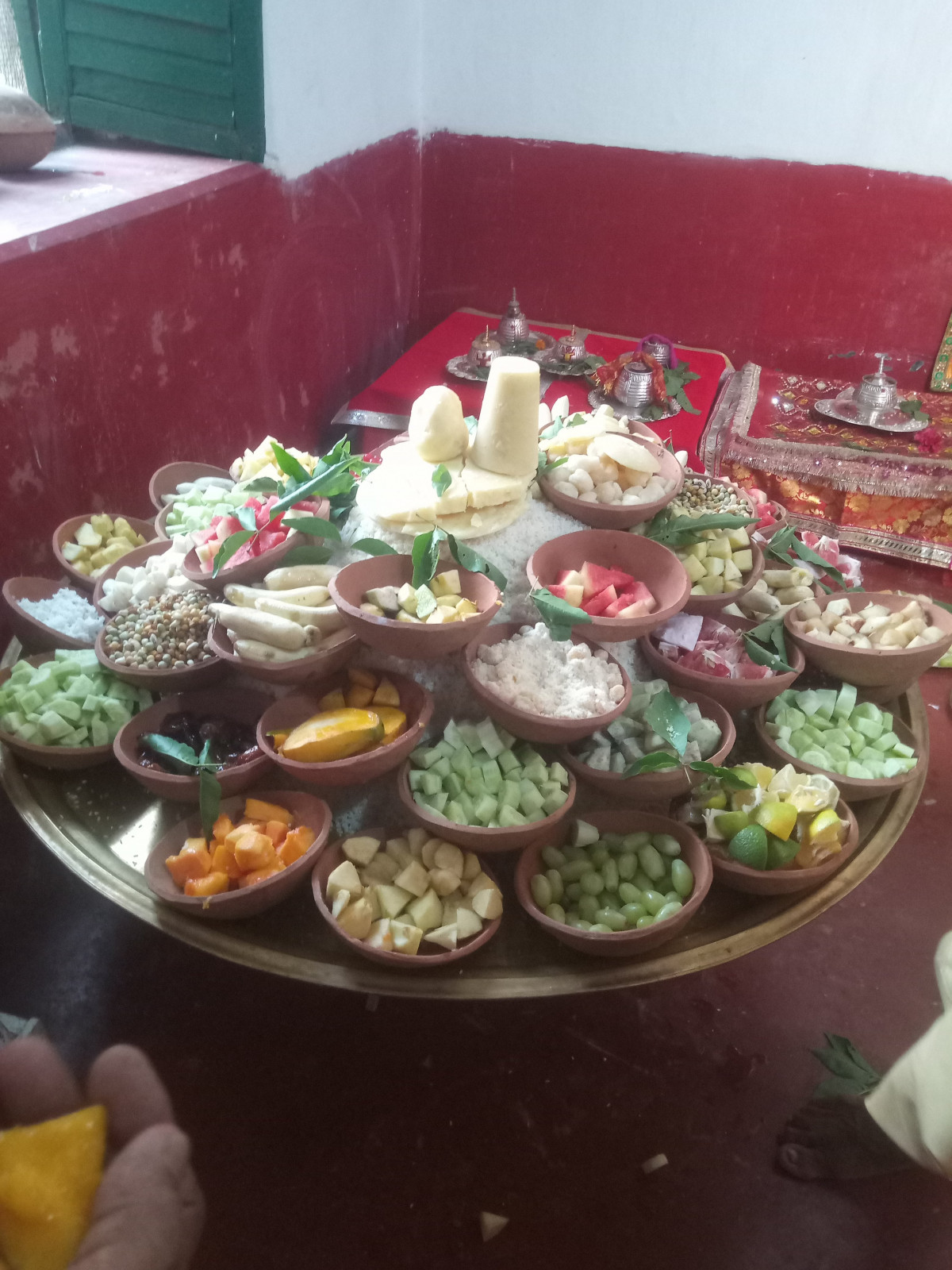 The revival of heirloom recipes was predicted to be among the top trends this year, according to the Godrej Food Trends Report 2020. And that is exactly what the Durga Pujo bhog is all about — a lavish feast, made with indigenous ingredients, which is offered to the deity during the four days. Each family has its own bhog avatars passed down to generations. The offerings are not just the humble khichuri and labra – in fact, it is more than that. The bhog (served in silver or brass utensils) as a part of Naivedya, is an essential ritual where devotees offer gratitude to the Goddess through indigenous foods during the four main days of the Puja.

In the late 1500s, the bhog ceremony was a “benevolent gesture” practised by the kings of Bengal. Later in the colonial era when the zamindars flourished, the bhog transformed into an elaborate and lavish feast consisting of khichuri made with Gobindobhog rice, luchi, vegetable curry, anarosher chutney (pineapple chutney), bhater payesh (rice kheer) and narkel naru (coconut laddus).

Earlier, meat (usually goat) was cooked without a trace of onion or garlic. Instead, aromatic whole spices, ginger and cumin paste were used, which came to be known as Niramish Mangsho (vegetarian meat). This practice still continues in some families. Another interesting aspect of this tradition is that not every household can offer cooked rice in the form of khichuri, pulao or panta. Usually, non-Brahmin households only offer uncooked rice in the form of Naivedya with fruits and sweets.

However, the rich legacy of the barir pujo will not be the same this year. Many families have come up with their own guidelines to keep the celebration muted, with only core family members in attendance. And though the bhog distribution for visitors this year is a strict no-no, here’s checking out what the Goddess feasts on traditionally at some of these the bonedi baris.

The famous Shovabazaar Rajbari Pujo was started by Raja Naba Krishna Deb in 1757 to celebrate the victory of the East India Company over the Nawab of Bengal, Siraj-ud-Daula, in the Battle of Plassey. This was the first puja in a household where British officers, along with Lord Clive and Warren Hastings, were invited to witness the idol. Rice does not feature in their elaborate bhog spread. Their Durga Pujo is hosted by the two branches of the Deb family. The unique items include various mouthwatering sweets like kheertakti, mithey goja, chauko (square) goja, pantua, khaja and savouries like hot samosa with a filling of spicy potatoes and lentils, and the classic radha ballavi (deep fried bread stuffed with lentils).

In 1610, Lakshmikanta Roy Chowdhury and his wife Bhagawati started this 410-year old Atchala Bari Durga Pujo in the southern part of the city of Kolkata. Durga Pujo here is older than the city of Kolkata itself. The stunning bhog platter is no ordinary fare. The spread has ghee bhaat, basanti pulao, khichuri, deep-fried vegetables and bori (dried lentil balls), traditional fish preparations, payesh and an array of mishtis. On Dashami, the Goddess is given a final farewell with a homely spread of panta bhaat (fermented rice), khesari daal, kochu saag (taro leaves), koi machher jhaal and chaltar ambal (sweet and tangy chutney made of elephant apple). Cooks who have been with the family for generations make the preparations.

Located at Pathuriaghata in North Kolkata, the palatial mansion of Babu Khelat Ghosh has been grandly celebrating Pujo since 1864 when he first started the tradition. Pujo at this 80-feet-long thakurdalan depicts a flamboyant past. The century-old inimitable bhog item in this household is the chandana kheer, a milk pudding that is flavoured with sandalwood. On Ashtami, an assortment of deep-fried savouries are offered such as shingara (samosas) and nimki (crunchy savouryy snack), along with sweetmeats like chandrapuli (coconut-filled sandesh), raj bhog (sweet kesar rasgullas), taal shansh sandesh (liquid jaggery filled sandesh). The sweets are made at home and use sugar imported from Benaras, instead of the regular refined variety.

Various forms of bori (dried pellets) made from poppy seeds, spinach, peanuts and different lentils accompanied by an array of pickles — plum, tamarind, mango and aamshi (dried mango) feature in the bhog platter. The only cooked meal that is offered to the Goddess consists of deep-fried luchi, vegetables (prepared without salt) and mishtis. On Bijoya Dashami, women of the family eat a meal comprising shukto, shaak, maachh and achaar (pickle) as part of the bhog.

Have you heard of any other traditional bhog items? Share with your comments below.