Why 'Vicky Goes Veg' must be on your kitchen shelf

Chef Vicky Ratnani created a stir with his extremely popular television show, Vicky Goes Veg, which was all about innovative meat-free dishes. An extension of that has been a cookbook of the same name which he launched in 2014. Featuring recipes from the television show, Vicky Goes Veg makes vegetarian food mouthwatering and fun. It's a compilation of recipes from different parts of the world but with an Indian twist. So, a flavourful Hing-roasted Pumpkin jostles with Green Chilli and Raw Mango Risotto, while the popular cabbage coleslaw transforms into a Nasik Radish Slaw with a few swift strokes of Vicky's knife.

From salads, soups and party starters to one-pot mains and desserts, the book has every course covered in each of its five sections. 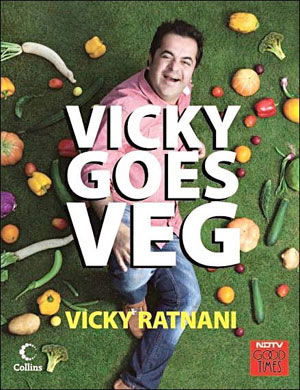 It shatters the notion that vegetarians mostly have to work with potatoes, paneer and soy chunks if they want to try international recipes. Sure, these do sneak into a few recipes, but it's clearly the veggies who are the stars. Locavores will also rejoice since Ratnani has mostly used local ingredients that are easily available at every vegetable vendor or kirana wala. While 'foreign' vegetables and fruits such as bok choy, avocado and rambutan have been featured, the humble tendli, kairi and bhindi also get glamorous makeovers. The book encourages cooks to adapt and innovate and Ratnani helpfully suggests tweaks to recipes. What makes this cookbook even more user-friendly is that he explains what ingredients such as pesto or zaatar mean and how one could make them at home. This makes it easier for home cooks who might not be familiar with them.

Colourful photos, neat layouts and tips and trivia sprinkled throughout the book make it all the more interesting to go through. The language used is conversational and in the style that has become synonymous with Ratnani. Sample this: "Set it aside to chillax" or "The idea is to stir-fry it bang bang bang!" What also adds character to the book is the fact that vegetable vendors are in the spotlight through a spread of photographs.

Vicky Goes Veg shows that innovative yet easy vegetarian food can be a star in its own right and doesn't have to play second fiddle to meaty fare. Here's what Chef Vicky Ratnani had to say about the cookbook at Vikhroli

What is your favourite recipe from Vicky Goes Veg?