The journey of cookbooks – then and now

There’s more to cookbooks than recipes and ingredients. A good cookbook will tell you a story; it will talk about the food’s cultural significance, its history and more. But cookbooks have a history of their own. In a stimulating conversation with Saee Korrane Khandekar, Author- Crumbs, and filmmaker Jyotsna Shahane, at the Culinary Chroniclers Conclave, Vikram Doctor unravels the history of cookbooks, their evolution and their making. 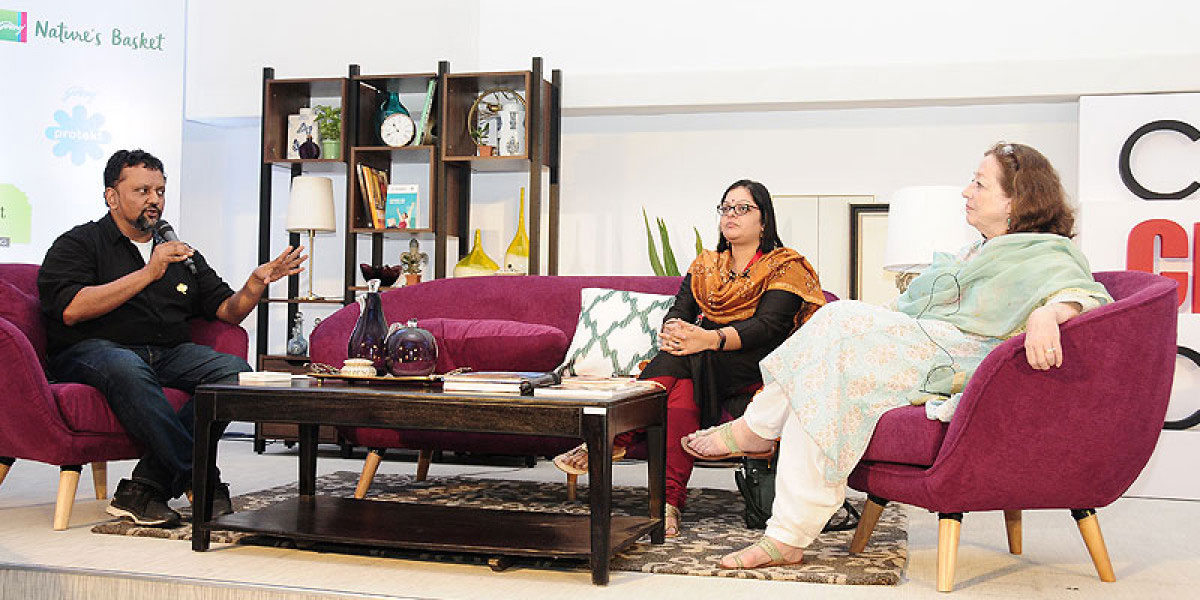 It is safe to say that cookbooks in India were born in Maharashtra and West Bengal and the influence of social movements is evident in older cookbooks. On the similarities of social influences on cookbooks between the two states, Vikram says, “Both states were home to two major cities with access to popular and large publishers. They had a strong British influence and traditions of movements that have empowered women. The cookbooks reflect the influence of social movements such Prarthana Samaj movement in Maharashtra and the Bramho Samaj in West Bengal.”

Today, cookbooks are seen as repositories of traditions and authentic recipes. But in the 60s, 70s and the 80s cookbooks were difficult to come by which made it challenging to discover different recipes. Saee explains that “If someone were travelling from abroad, women would note down the recipes. These books had great value as it was difficult to get those recipes from elsewhere.”

The internet and cookbooks

Like all things, the internet has revolutionised food and cooking. With videos a tap away, it’s easier to watch the recipe and cook simultaneously than read a book and cook. But despite this change, thousands of cookbooks are published every year. Explaining the survival of cookbooks, Jyotsna says, “The moment you cook from a book, you establish a connection with it. The book holds memories of old meals you’ve made which seals the bond.”

Saee elaborates that people of a particular generation and a passion for food will always buy cookbooks. She further says, “The sale of cookbooks at large has something to do with aspirational value. It’s like buying a fantasy. When I see a cookbook that has a lamb with a beautiful glaze on it, I am tempted to pick it up. I may never cook from it or read it, but I will buy it because someday it may come in handy.”

What is a cookbook if it has no photographs of the food you are cooking, right? But before pictures there were line drawings which have been traditionally used in cookbooks. Jyotsna says, “Line drawings give you the exact details, they are much more evocative and leave a lot to your imagination. Photographs are aspirational and give you an estimate of what your end product will look like.”

Julia Child’s books don’t have any photographs, but there are a lot of line drawings which transport you back to her time. They leave you wondering how a pudding looked like in that particular mould. I can’t see that gleaming copper crust on the pudding, but I can imagine.

Publishers and their dilemma

Vikram Doctor pointed out that most of the interesting cookbooks in India are self-published. Mulling over the trend, Jyotsna said, “Most of the traditional publishers are unsure about how profitable a cookbook will be. Traditional publishers haven’t tested the waters and refrain from publishing cookbooks.” Saee says that cookbooks are expensive to produce and there are times when books don’t sell. The author and the publisher have to work together on managing the costs and making it accessible.

Giving credit where it’s due

Today, very few recipes are entirely new. Most of them are adaptations and modifications of older traditional recipes which make attributing them to a particular person difficult. Jyotsna says, “In India, food and recipes vary every 20 to 30 miles and every family has their version of their recipe. While working on my latest book, I realised that some households have the same recipe which makes it difficult to give credit to one particular person.”

Saee spoke about how her family recipe of the traditional goda masala evolved because her grandmother realised that the family could not digest its conventional spicier version. Saee says, “It’s easy for me to credit the recipe to my grandmother because she mentioned it in her journal.” Such anecdotes if mentioned in the book also give a context to the reader making it more interesting for them.

Do you share the same passion for cookbooks as us? Tell us what you love about them!