Monisha Bharadwaj Explains How The British Fell In Love With Curry

That the British love their curry is no secret. But what is interesting is how this love affair evolved over centuries and what ‘curry’” actually means to the British. UK-based chef, author and food historian Monisha Bharadwaj shared the highlights of the evolution of Indian food in Britain during her talk at the British Council in Mumbai

Curry is as intrinsic to British food as fish and chips. In fact, such is Britain’s obsession with Indian food, that in 2001, former Foreign Secretary Robin Cook called chicken tikka masala a “true British national dish.” 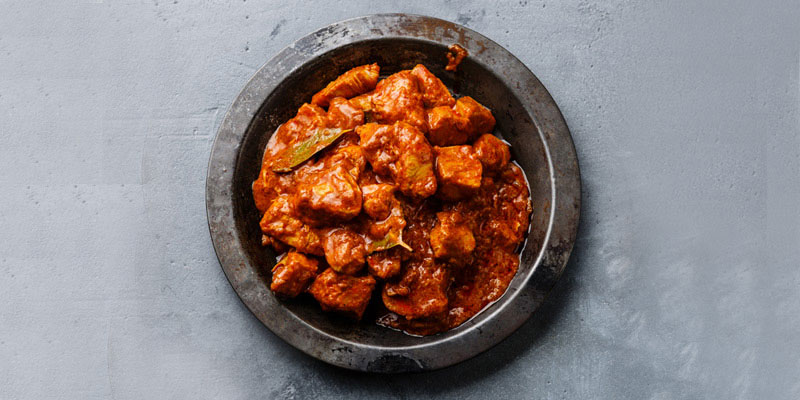 “The word curry probably comes from the Tamil word ‘kari’, which means sauce or vegetable dish,” says Monisha Bharadwaj, a chef, author and food historian who is based in London. “The British in India probably learnt the word curry from the Portuguese who called Indian sauces carree.”

But interestingly, the term ‘curry’ has completely different concepts in India and the UK. “In India, it would be generally accepted as something that is in a sauce or gravy. Not a dish that is dry,” explains Monisha. “To an Indian, curry is a dish that has gravy. But to those unfamiliar with the cuisine, any savoury dish that is cooked with spices or curry powder, whether it has a sauce or not, is curry. I have heard people in England refer to samosas as curry!” she laughs.

A spicy affair
The British love affair with curry has been enduring. Its roots can be traced back to as early as the 1700s when the East India Company ruled India. Officers stationed in India wrote letters back home. “Recipes for mulligatawny soup, kedgeree, koftas, hot sahib’s sauce and Sergeant’s Chicken were described in letters,” says Monisha.

The officers and their wives also carried collections of Indian recipes back with them when they left India. Monisha explains, “Emma Roberts was one such lady who contributed to several cookbooks in the UK. Her recipe for Dum Pukht, which means meat cooked slowly in its own juices, was a popular one.” She adds, “The recipe suggested rubbing a spicy paste over a bird and stuffing it with pistachios, sultanas and rice. It was then browned in butter and cooked with more rice, pistachios, sultanas and almonds.”

Working out the right mix
The unavailability of ingredients or tools meant that the British often had to use substitutes or adapt dishes to local cooking techniques. For example, lemon juice was used as a souring agent instead of tamarind, while flour and not ground masalas would thicken sauces.

“The recipes were often a curious combination of the local cuisine combined with European techniques. Mrs Beeton was a famous British food writer whose Book of Household Management was first published in 1861. It had a recipe for breakfast Kedgeree which had smoked fish and eggs. And what was the Kedgeree based on? Khichdi!” says Monisha.

The introduction of readymade curry powder in the mid 1800s was a turning point of sorts since the British did not have grinding stones to crush spices. Commercial curry powder made it easier to cook Indian food at home. In 1890, Vencatachellum, a spice company in Madras, began to supply curry powder to Sharwoods, a British company. The curry powder took its name from its place of origin and the Madras Curry was born.

The spread of the curry culture
The first curry recipe in English featured in Hannah Glasse’s bestselling cookbook, The Art of Cookery, in 1747. Nearly a century later, renowned British author William Makepeace Thackeray popularised the dish in his ‘Poem to Curry’ in 1846.

The first Indian restaurant was set up in 1810 by Sake Dean Mahomed, a former captain in the East India Company.  The Hindoostane Coffee House was meant to cater to returning officers of the East India Company.  However, Mahomed went bankrupt in two years because the officers brought back their cooks from India and would eat Indian food at home itself. Thus, the Hindoostane Coffee House didn’t survive.

The curry culture spread as an increasing number of people from pre-Partition India came to the UK and started their own restaurants. Bengali boatmen from Sylhet (now in Bangladesh) were brought by the British to work on steamships in the 1840s. But by the Second World War, many of these boatmen regularly jumped ship to escape the bleak conditions. The Sylhetis began buying out bombed out fish and chip shops and cooked curry. These shops were frequented by late night pub goers who discovered that spicy curry was a good meal to have after a couple of beers.

Popularising India and its food
Queen Victoria, who became the empress of India in 1858, was fond of Indian food. She had Indian servants who regularly cooked it for her. It was during her reign that events such as the Empire of India Exhibition became popular. These were organised to encourage people to show an interest in the British empire.

The exhibition held at Wembley in 1924-25 ended up having a long lasting influence on the British culinary scene. The India pavilion at the exhibition was one of the few where food was served. An English man named Edward Palmer was appointed to advise the restaurant. Some of Palmer’s relatives were Indian and he had considerable knowledge of Indian food. He founded E.P. Veeraswamy and Co to promote Indian food.

Monisha explains, “The restaurant landed up serving more than 500 vegetarian meals at that time because so many people came there. The café was retained and run by E.P. Veeraswamy and Co even after the exhibition ended because it was so popular.” The restaurant ‘Veeraswamy’ opened in Regent Street in 1926 and is today Britain’s oldest surviving Indian restaurant.

A national obsession
The obsession has continued: The Indian food industry is one of the biggest in the UK and is reportedly worth £4 billion . The range of Indian food available spans non vegetarian and vegetarian dishes such as chicken tikka masala, korma, Madras curry, jalfrezi, vindaloo, tandoori, saag aloo and gobi aloo.

The easy availability of ingredients is also spurring people to try their hand at cooking Indian food at home. “When I first moved to Britain, I used to go to Southhall to buy Indian food. I used to be so excited to see things like coriander, which was not available everywhere. Today, coriander is part of British cooking and not Indian cooking alone,” points out Monisha.

It is a love story that began over 200 years ago. And as the British figure new ways to have more and more curry and Indian food, it’s clear that this obsession will continue scaling new heights.