The healing and nurturing power of traditional Indian food

Pregnancy and lactating women require the best nutrition possible to meet the increased and unique demands. However, for the longest time, the pregnancy diet has been associated with many myths and misconceptions. Sonal Chowdhary and Supriya Arun believe in the healing and nurturing power of traditional Indian food. 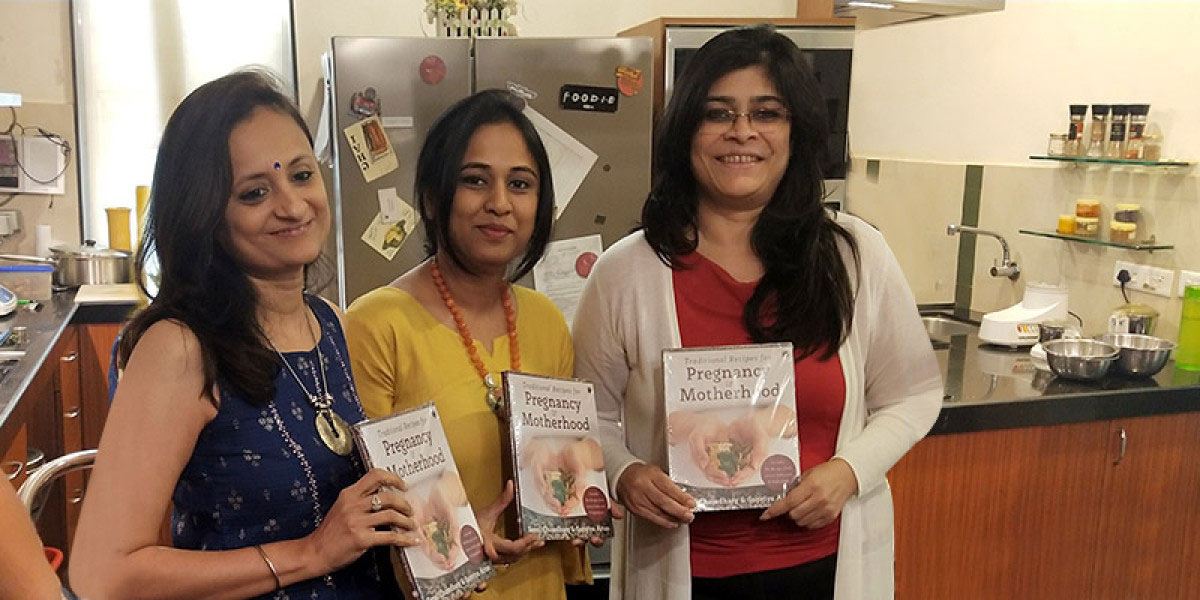 Both Sonal and Supriya are nutrition consultants certified from the American College of Sports Medicine and are passionate about traditional and regional delicacies. They share with us why traditional food is still relevant and how India’s culinary diversity has influenced traditional food across the country.

“One of the most common misconception, when it comes to diet during pregnancy, is to eat for two. Another is to avoid traditional foods for fear of gaining excessive weight. The calorie and nutritional requirements of pregnant women varies with each trimester, and it is very important to understand and take care of one’s diet.” Says Sonal.

Many women believe that supplements will take care of the additional requirements during pregnancy, is another common misconception.

Both, Sonal and Supriya, advocate a diet with a right mix of macro and micro nutrients which encompasses foods that are traditionally consumed, sourced locally, seasonal as well as home cooked. They concur, “It is important to take advantage of natural galactagogues and incorporate them in the diet to improve lactation as well as maintain hormonal balance, instead of resorting to artificial means.” Supriya. says, “It is important to understand that absorption of vitamins and minerals are better from natural food sources than the supplements.”

Why a pregnancy diet book?

When they came across several pregnant women and new mothers who were very confused about what to eat during this important time in their lives, they realised the lack of published literature on traditional Indian food. Sonal says, “These women are caught between western influences, internet information and are sceptical about traditional foods. We realised the gap in published literature as there was no book available for mothers that contain Indian traditional food recipes with nutritional information that guide them to make informed decisions.”

Hence, to bust some of the deep-seated myths around diets during pregnancy, they came up with a book that throws light on the nutritive value of Indian traditional food. The book – Traditional Recipes for Pregnancy and Motherhood also carries traditional heirloom recipes that are useful during pregnancy and lactation. These recipes were collected from mothers and grandmothers from different regions of the country.

The importance of traditional food

During pregnancy and lactation, a woman’s body undergoes number of changes and requires the best nutrition. The authors believe that the traditional Indian diet uses specific foods and herbs which are rich in micronutrients, antioxidants and medicinal properties. Supriya says, “We believe traditional recipes are all the more relevant in today’s times given that lifestyle diseases are cropping up due to processed foods which have zero nutrition and are loaded with chemicals. The aim of our book is to strike a balance between the traditional and the modern, and have the best of both the worlds by giving a scientific approach to traditional recipes with well researched data from scientific journals.”

In their quest to make these traditional recipes appeal to the younger generation, the authors painstakingly revisited all the calorie-laden items, and worked out recipes with lesser fats and sugars without compromising on the taste and ingredients. Though the book contains some high-calorie ladoos and halwas because of its rich micronutrients, they have been balanced out with calculated calories and advice on portion size. All the dishes have been prepared and tasted in their kitchens and the authors vouch for their authenticity and taste.

Supriya and Sonal both believe in the importance of eating locally grown, regional food. They say, “We are genetically predisposed to foods that are regional, seasonal and local. We relate to the taste instantly if we have been exposed to these foods in our childhood. The ingredients in the recipes in our book have unique nutritional and functional properties particularly useful for women in this phase and can be consumed by anyone generally too.”

“Gond or Indian gum is used widely in the north of India while it is unheard of down South. Turkey berries are common in the south while never used in the north.” Turkey berry, one of the superfoods in the book is high in iron content vitamin C, which helps iron to reduce to the more absorbable ferrous state from its ferric state, thus enabling rapid absorption. Turkey berry also strengthens the mucosal layer of the stomach and reduced gastric distress which is a common problem in pregnant woman.

Superfoods are powerhouses of nutrients; even small quantities can provide a lot of nourishment to the body. That is why including superfoods in the diet adds a lot of value to a woman’s health. Sonal and Supriya chose six superfoods used in traditional kitchens across India which are steeped in goodness and have presented them as a separate section in their book. The section on superfoods is a treasure trove of information and has references to recipes and how to incorporate them in your diet.

This book is a labour of love that takes into account healthy and nutritious food packed with goodness. Food consultant Rushina Munshaw says, “Indian culinary culture is rich in food lore and knowledge of how food can be both functional as well as medicinal. We have food that are eaten for their healing properties, certain spices for warming in monsoon and winter, specific foods for an upset stomach or to fight a cold. Similarly, foods eaten during pregnancy and lactation bolster the health of the mother and baby. This knowledge has been orally passed down from one generation to another, and not been documented. This book on traditional pregnancy recipes certainly fills that gap.”