Have you been curious to know about Mangalorean Catholics? Well, here is an insight into my community 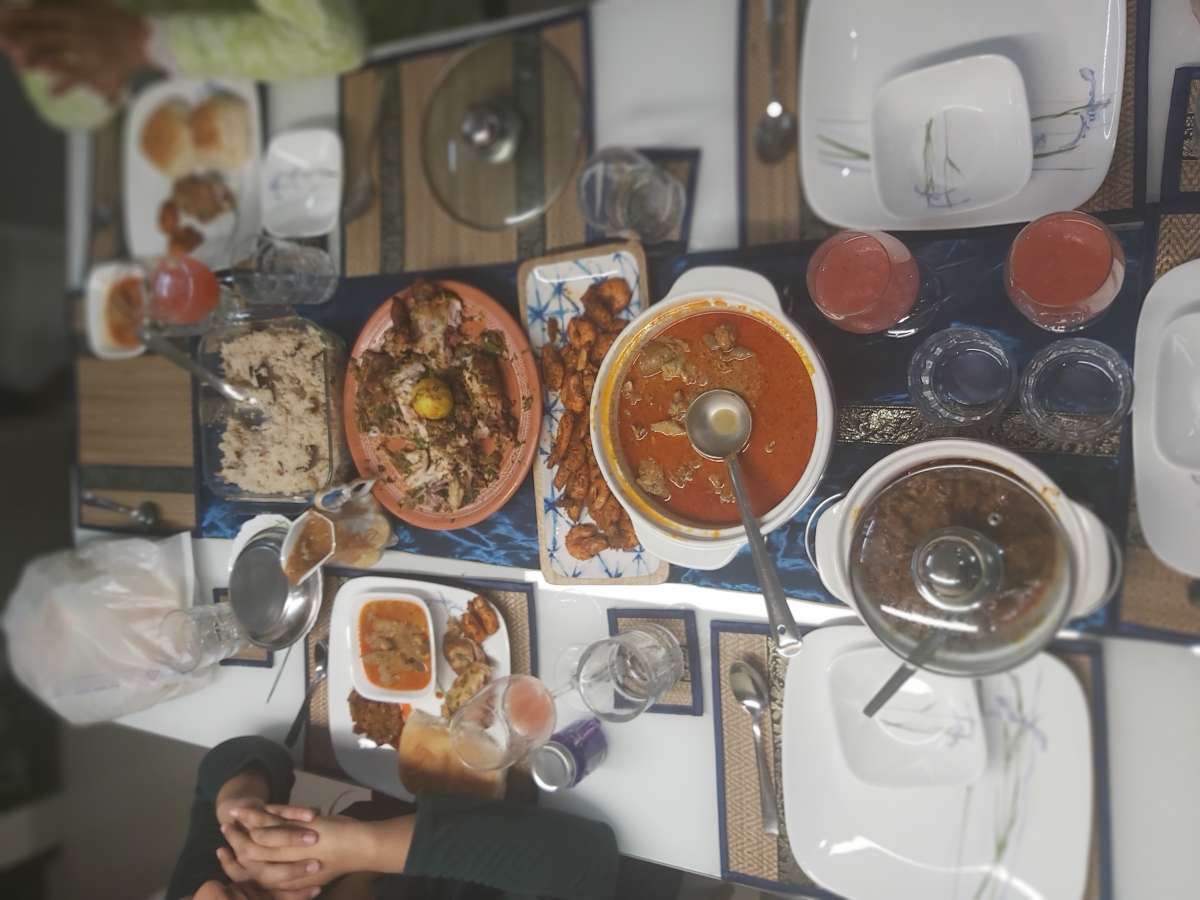 Mangalorean Catholics are an ethnoreligious community from the southwestern coast of Karnataka, India, and speak the Konkani language.  History says Contemporary Mangalorean Catholics descended mainly from the Christians of  Portuguese Goa, who migrated to South Canara between 1560 and 1763 throughout the course of the Goa Inquisition, Portuguese – Adil Shah wars, and the Portuguese– Maratha wars. They learned Tulu, and Kannada whilst in South Canara, but retained Konkani as their mother tongue and preserved much of their pre-Portuguese ways of living.

I was born to a catholic Mangalorean mother and a Tamilian catholic father. Since my father was working in the Gulf (sounds cliché, but can’t hide the truth!), I was raised as a ‘pucca’ Mangalorean. So, it’s only natural, that I want to dedicate this post to the greatest home chef of my life, the one who created me and nurtured the art of cooking in me, my mother – Annunciation Fernandes, also called – Ancy Anthony. Though she moved on to the other world when I was just 17, I have lifetime memories of her making delicious food for us.

Christmas was the most exciting time of the year. The preparations started in November with a trip to the famous Crawford Market in Mumbai to buy materials for our Christmas clothes, dry fruits for the Christmas cake, and the other ingredients for the Christmas ‘Kuswar’. It seemed as if the market had everything that my mother wanted. ‘Kuswar’ is a term used for a set of unique Christmas goodies that are part of the cuisine of the Goan Catholic community of Goa and the Mangalorean Catholic community of Karnataka, India.

The first thing my mother did was soak the fruit in rum and seal it away. Her biggest dilemma was buying alcohol. Contrary to the stereotypical image in Bollywood movies depicting the catholic characters drowning themselves in alcohol every day, my family was a total teetotaller. So naturally, my mother never knew how to buy alcohol. She would request some cousin or a friend to buy a bottle of Old Monk Rum for her and promptly donate the remaining quantity she didn’t need to make the cake.

The next thing was going to the tailor for our clothes. I have fond memories of looking at magazines with Chinese models posing with the latest trends. She was particular, when she discussed with “Masterji” about the latest patterns of dresses, but kept repeating to him, “Masterji naya pattern banana, pur length lamba rakhna ( Masterji, show me the latest designs, but keep the length of the dress long). My Father had strict guidelines. no sleeveless, no short dresses, no tight pants, no blouse tucked in the pants, no dark colors, no denim, etc. Sigh! I wonder now, where was the room for creating a style, but my mother did all she could, and I always looked pretty, at least in her eyes.

Around the 2nd weekend before Christmas, the house would be scrubbed squeaky clean and the new curtains would come out. By the 20th, the plum cake would be baked, and I remember how she would baste the cake with rum every day until the 24th so the alcohol would seep in. Every day, there on would be reserved for making traditional sweets for the kuswar platter such as nevries, kulkuls, roce cookies, coconut cookies, guliyo, rice ladoos, chakli, besan laddoo, til laddoos, etc, all this to the songs Abba, Boney M and Elvis Presley’s Christmas Carols in the background. If you noticed, most sweets also included seasonal ingredients like guava, till, etc that are necessary for the winter.

Putting up the crib, the star, lights, and decorating the house would be my brother Rolf and my responsibility, and then just like that, it would be Christmas Eve. The house, filled with the aromas of fruitcake and all the homemade sweets, looked beautiful with the lights, new curtains, and bedsheets. Our clothes, shoes, and accessories would be laid out before Christmas mass and I would be brimming with so much excitement, that every few hours I would go and check my new dress and shoes.

Attending the Christmas Eve mass bought different energy and excitement. I remember in my childhood; the mass would start at midnight and it used to be a cold night. As I entered Our Lady of Remedy Church, Poinsur, the whole place would be lit up with the huge crib and Christmas tree. Everybody looked their finest. The ladies in their beautiful dresses and sarees adorned with the finest of precious gold jewelry and the men and young boys looked dapper in their suits. You could distinctly make out a young bride in her wedding Sadoh (Wedding Saree) with her shiniest mangalsutra and gold jewelry. Christmas Mass was elaborate and longer than the usual Sunday Mass. The choir would be the highlight, what with them rehearsing for almost a month. After mass, it was all jubilance everywhere, with everyone wishing and hugging each other Merry Christmas. We would gather at home with my family and neighbors, eat sweets, cut the Christmas cake and click photos…OH! Such a beautiful night! I have fond memories of sleeping snuggled in my warm blanket, to the company of twinkling lights in the balcony and the song “Silent Night” in the background. I was afraid of the dark and the light from the star and Christmas tree was a reassurance.

Christmas morning came with a lovely mist and my mother would wake us to get ready for our family luncheon. For a few years, as far as I remember it was at my grandmother’s house. But when she passed away, the whole gang would get together at “Chachu Uncle” House i.e. my elder uncle’s house in Borivali. We would crack top-notch silly jokes, laugh at them, and recollect memories of the year gone by while relishing the kuswar. My aunt whom I call Shali mummy made the best cakes, coconut cookies, and rose cookies. And when it was time for lunch, boy oh boy, you had to see the lunch table. It would be filled with sannas, green mutton curry, bafat chicken with coconut milk, duck indad, pomfret fugad, biryani, kheema potato chops, prawns balchav, egg salad, and kachumber. It doesn’t end here — there was still the dessert to come. She used to make a lovely chickoo souffle which melted in our mouth and the ever so delicious custard and jelly trifle. We all would have so much to say and so many conversations to continue, but the “food coma” was simply unavoidable. In the evening, we would wake up to the lovely aromas of paati chaha (local lemongrass tea) and eat “Merwans cake” which we were offered with so much love that we just couldn’t refuse. When it was time to leave, we would be very sad, and the goodbyes were the longest of hugs.

But even today, after the old have grown older, some have passed on and the younger have gotten older, married, with our spouses and our children joining in at my Aunt Olive’s house in Mulund, the essence is the same: eternal love, sharing, fun, and laughter …Isn’t that now the spirit of Christmas

… Merry Christmas from Mangi girl now married to a Maharashtrian